How to Properly Display the American Flag Outside 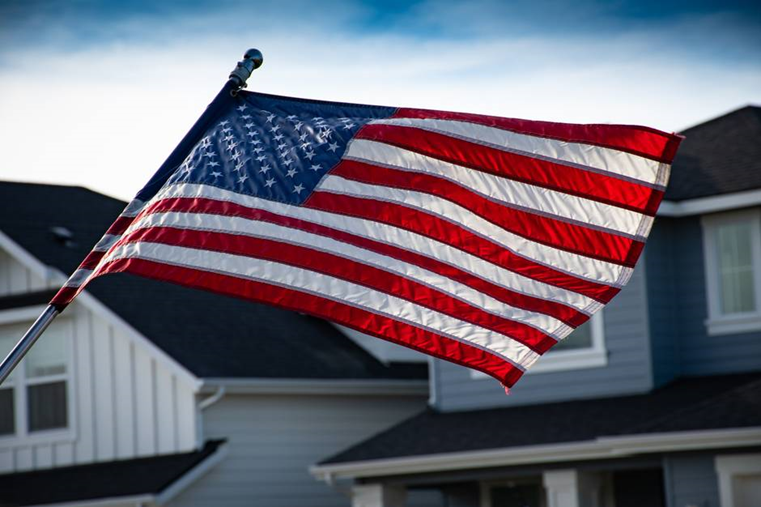 So you have flag day coming up, or you simply want to display the American flag either outside or indoors.

There are so many different scenarios for displaying the flag, and each will have its own protocols and rules that you must follow. One of the key aspects of showing respect to the flag is properly displaying it. If you’re unfamiliar with the rules and etiquette, no worries. We’ve got you covered.

Keep on reading for our complete breakdown of how to properly display the American flag in all different scenarios, so you can do so with peace of mind that you’re doing it correctly.

Display the American Flag 101: How to Display the Flag Outside of Your House

You might be interested in displaying your flag outdoors. You can do so using a pole attached to the wall, or on a horizontal rope from your property.

Both cases have a slightly different set of requirements you’ll need to meet.

Attached to the Wall

Moreover, if you’re displaying the American flag on one staff, and you have other flags at the same height occupying different staff, you’ll want to have the U.S. flag on the farthest left. Basically, it needs to be in its own right.

On a Horizontal Rope

In this case, you should hang the flag vertically with the canton that’s farthest away from your property. Also, you’ll follow the same protocol we’ve previously mentioned of having the flag be on its own right, with the union (or star field) at the top.

If your property is right on a street or the main road, if you can point the union towards the north or east, that would be preferable.

On Any Type of Flagpole With Other Flags

There are some common rules you need to know if you’re hanging the U.S. flag on any sort of flagpole with others.

First, the American flag should always either fly above other flags, and match them in size, or be slightly larger than the others. Second, if the other flags include international ones, they should be on a separate pole, it can’t share the same staff as the U.S. flag. So you have to pick a good quality flag pole (or three), just click here to check them out.

Third, if you want to add state and military flags, you totally can. However, they must be flown lower than the U.S. flag, and they can’t be larger in size.

Rules for Displaying the American Flag at Night

All of the prior rules work for any time of day. Yet, when it comes to leaving the American flag at night, there are some additional etiquette points you need to follow.

Traditionally, the U.S. flag should always fly in light. It should be illuminated in a way where you can see the flag clearly. Therefore, you should have some form of lightings like streetlights, house lights, or even a solar flagpole light to keep it bright.

If you can’t do so, you must bring the flag indoors.

The Foundational Etiquette of Respecting the Flag

At this point, we’ve covered all the major rules of displaying the flag outdoor. You still need to make sure the flag is respected by treating it in a manner that meets the following requirements.

We know that the part about not using the flag as part of a costume or an athletic uniform tends to surprise people. However, that’s actually the proper protocol that folks should follow.

If you’re wondering about how to wear American Flag paraphernalia or carry one during a parade, check out the rules below:

Moreover, if you have to dispose of a flag that’s tattered, damaged, or no longer appropriate to display, you can’t simply throw it in the trash. It’s preferable to burn it, according to U.S. Code, Title 36, Section 176k, Respect for Flag.

Ready for Some Red, White, and Blue?

Sometimes, you simply feel the need to display different flags and add them to your home’s exterior or outdoor space. It’s all delightful until you run awry the rules that govern the right way to display the American flag.

Thankfully, after reading our guide, you can display the U.S. flag to your heart’s content, knowing that you’re showing the appropriate respect.

Need more home decor in your life? Make sure to check out our ‘home decor’ section for all the tips and tricks you could need.